GAHR THY ROOH GRAHEER: Michael McClure’s The Beard Poster, portal to another time. 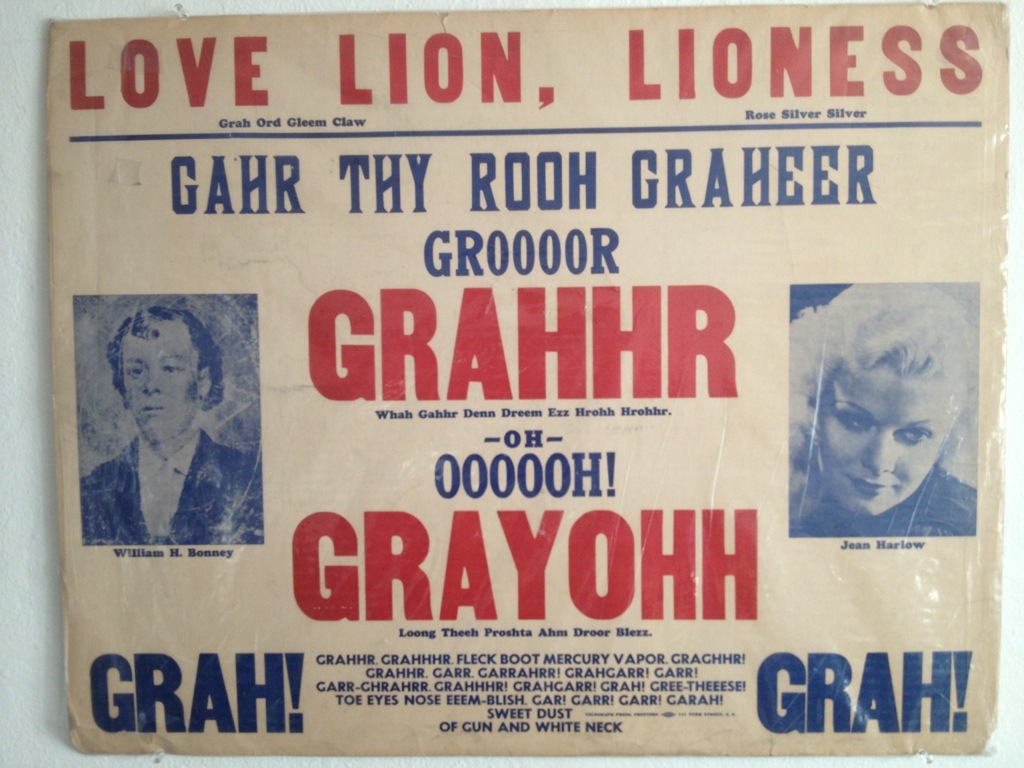 listen to ‘GAHR THY ROOH GRAHEER, Michael McClure’s “The Beard” Poster, portal to another time’ on Audioboo

In 1964 I was coming back from a trip to Los Angeles and I had a copy of Ring magazine, a boxing magazine at the time, under my arm… I’d seen Norman Mailer in New York, I think I met Norman with Allen Ginsberg as a matter of fact, and I was interested in Norman’s interest in boxing. So here I was with a copy of Ring magazine and I’d been noticing boxing posters and even gone to a boxing match… and I’d been, particularly… interested in boxing posters [rather] than boxing because there was a form for the boxing poster at that time.

So here I was on the airplane with a copy of Ring magazine under my arm and a light bulb went off in my consciousness just like they show in the comic strips… and inside of the light bulb or coming from the light bulb’s blaze was this poster – a boxing poster. And I looked at it in my consciousness and boxing poster was in beast language and the two characters on the poster were Billy the Kid and Jean Harlow. the two boxers were Billy the Kid and Jean Harlow….I got off the plane, got in a cab, took the cab back to my place in the Haight Ashberry and there in the corner drugstore was a boxing poster in the window. So I had the cab driver stop.

I went into the liquor shop and got a good look at the boxing poster, got a look at the back of the boxing poster and saw that it was done by the Telegraph Press in San Francisco… The next morning I got up early and I phoned Telegraph Press… I said my name is Michael McClure and I wonder if you would do a poem poster. He said sure kid just bring it on down we’ll do it… So I got the head shot of Billy the Kid… I got a shot of Jean Harlow… I took it down to Telegraph Press.” (MC)McClure put the posters up around New York and distributed them to friends (including Kenneth Anger) along with fake boxing match tickets that he had also printed up.

I put the poster up on fences, windows, and in liquor stores where boxing posters would be, and put one up behind my head in the room I worked in at the time, which overlooked the bridge and the ocean. I could feel the presence of Billy the Kid and Jean Harlow broadcasting from the beautiful poster to the back of my head out towards the ocean. They began enacting the play and I began typing it up. They’d say a few pages, I just typed it. I thought it was a nature poem about mammal sexuality and mammal love. It could have been a tantric ritual.