Song-by-Song: [Hydraulic] Serenity Applicator from Flight of the Atom Bee

Every  week, I am publishing an article about a composition of mine, the gear, the inspiration, what was involved, and so on. I hope you enjoy them! I am enjoying writing them. —Knox

I have mentioned the Roland JX-8P Synthesizer in the pieces about Flight of the Atom Bee and The Big Shimmer. I used it to create the chordal pads that dominate both pieces. I do not recall using it on Wild Pink Yonder, for whatever reason.

There is an old maxim in the electronic music community,”New piece of gear = new track.” In other words, when you get a new piece of gear, its sounds inspire a new composition. At the time I wrote Wild Pink Yonder, I was in the end of a gear acquisition binge and that is perhaps why I didn’t use the JX-8P on that song.

The reality is that, over time, the JX-8P, even more so that the Serge Modular, became my secret weapon. I used it for pads, but even more importantly, bass sounds.

The JX-8P is one of the great under-appreciated syths, I believe largely due to its bland preset sounds and the relative difficulty in programming new sounds. It had two digitally controlled multi-waveform oscillators, a great analog filter. Programming was done with either setting one pararmeter for a sound via slider at a time, which made intuitive sound design almost impossible, or with the PG-800 Programmer.

The Pg-800 made the exploration of sound design on the JX-8P quite intuitive, but since I knew nothing in the beginning, really, about what any of the parameters did to sound, I was just blindly experimenting. The thing was, I didn’t mind spending two days tweaking a sound to get it right. All the pad sounds on The Big Shimmer and Flight of the Atom Bee were the results of such exploration. It was a form of meditation for me. 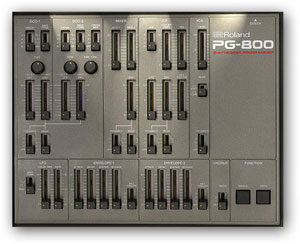 As time rolled on, I got a lot more proficient at making unique usable sounds. It has always seemed to me that the depth of the JX-8P itself worked against its popularity, but it was and is an awesome machine for those willing to spend the time building sounds from scratch. I will be talking about the JX-8P in future articles in this series: in retrospect, its sound was clearly at the core of my music composition and arranging process.

I haven’t had a JX-8P in over ten years, as of this writing in 2013, but looking at the above pictures, I find myself thinking about how nice it would be to have one again. There is now an iPad version of the PG-800, which makes the prospect quite possible. 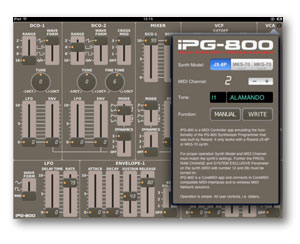 I would have to say that the genesis of [Hydraulic] Serenity Applicator was the bass sound itself. I’m not sure what I was doing, but somehow I stumbled on this very percussive compressed bass sound which possessed very little harmonic information: it harkened back, for me, to the bass sound of Captain Beefheart’s song, Little Golden Birdies, from Clear Spot. I fell in love with it immediately and set out to write a bass line using it. You hear it in the first measure of the song.

I stretched the bass line out for a couple measures and set about writing the basic drum part, which remains pretty much the same throughout the song. I was using an Emu SP-12 drum machine at the time, a wonderful machine much love by rappers and hip-hop artist for its rhythmic feel.

It was my intention to use the same short bass part for the whole song which was beginning to take shape in my head. My thought was that, since there was so little harmonic content in the bass sound, I could just play different chords over same short repeating sequence. It almost worked, but, ultimately, I had to surrender to the musical needs of the song and modulated the bass part along with the chord changes, just like a real bass player would do.

After spending a few days building out the song, drums, bass, and the chord sequence (I still love how the first chord boldly announces itself at the third bar), it was time to add some melodic elements.

Using a system involving some archaic gear which I can’t remember, I was able to get beat-clock out of my computer into the Serge and sync a master pulse on the Serge to the song. This master pulse could be used to trigger envelopes, voltage changes, i.e., a step-generator, and so on.

I built some patch on the Serge: I honestly can’t remember which modules I used now. I started up the song and began twiddling knobs. I imagine I recorded to digital audio tape. After I got enough bits to use, I transferred them into the song file in StudioVision, editing, trimming, discarding bad parts, and began moving them around and placing them where they needed to be.

I wish I could say it was I who made the decisions, but it rarely was me at the helm when working on these songs. If I moved a piece of sound to the right spot, it would just lock into place, as if on its own. Much later, my friend Greg Jones pointed out that the song, with the walking bass line and the syncopated synth swirls, was straight-up ragtime in parts, but this was in no way a conscious decision on my part, as much as I wish I could claim it so.

In the middle dreamy part, I wanted the the Serge parts to convey an emotional arc over the melancholy chord changes. I believe I succeeded. I was always attempting to anthropomorphize my synthesizers, inserting my “hand” so to speak to evoke emotion.

Coming out of the middle part and back into the upbeat final two minutes, I had an inspiration to add a weather forecast and that is where “A few high clouds” comes from.

Somewhere in this period, I managed to overwrite the bass sound on the JX-8P and this was a real problem. I had recorded one final mix of the instrumental parts (excluding Serge parts and the weather report samples) and I was not happy with the pad sounds, which came from a Roland D-110 rackmount synth as I recall, and possibly a Korg DW-8000. I thought they were thin and lacked warmth and motion.

I spent many hours trying to find that bass sound again, using the manual programmer. Nothing else would do for this song. Alas, I could not achieve it. I could get very close, but close fundamentally altered the feel of the song, so I was stuck. All I could do was layer in a few more synth pads to thicken the mix. I wanted some shimmer, which I got from the Roland JX-8P in an overdub.

I finally got something that worked well, beautifully even, but I believed I could have made the song a little better if I could have rerecorded with a proper mix of pads. In retrospect many years later, it doesn’t matter. This is the song and it has stood the test of time.

When we were mastering this cd some years ago at Thomas Dimuzio’s studio in San Francisco, we were listening to the playback and, right around the part where the weather report comes in, I looked over and saw my friend and associate Gustavo Lanzas looking at me and shaking his head. I said,”What?”

He said,”You think this is pop music.”

I said,”Man, it’s as commercial as anything Dr. Dre puts out!”

And he said,”Yeah, right … when music goes from your ear to your brain, it passes through another dimension.”

I’m not sure if that is a compliment or not.

Lastly, I’ll break down the name of the song for you.

Hydraulic: denoting, relating to, or operated by a liquid moving in a confined space under pressure : hydraulic fluid | hydraulic lifting gear.

Serenity: the state of being calm, peaceful, and untroubled.

Applicator: a device used for inserting something or for applying a substance.