I occasionally like to dredge up an old piece from Sun Pop Blue, my old site, to post on here. There is a treasure-trove of material there. I thought I would share this piece on the statistical evidence that any man who wears a baseball cap around town, not playing baseball nor fishing, but as everyday wear, is most likely a minute-man.
BTW, if you listened to the Audioboo about this subject, there isn’t much in this story that wasn’t in there. 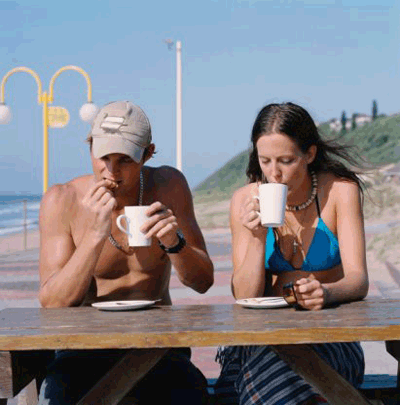 This poor girl is in for a big surprise … or, looking at her body language, maybe she got the surprise last night.

Many years ago, I was the member of a club that met on Tuesday evenings. Mutual friends introduced me to an attractive, tall blonde woman, whom I shall call T. I was immediately smitten.

It turned out that T was the coffee and snack person for the weekly gathering, but didn’t have a car. Naturally, I offered to pick her up and drive her and the goodies to and from the meeting.

Over the next few weeks, we got better acquainted and my hopes for a more intimate relationship were bouyed by our conversations about music, the seventies, her claims that she was a total pervert … you know, the usual.

I didn’t make a move because the time never seemed quite right. I was coming off a painful divorce and still sort of in shock, I guess.

Anyway, one day after the meeting I was helping T pack up the supplies and she said,”I don’t need a ride home, Knox, I’m getting a ride with D——.” And indicated some tall doofus in a baseball hat
standing near the door.

I bid T adieu and drove home to my big empty apartment. I called my friend J in Philadelphia. I had met J online. She was a musician, in a relationship, but we had become friends and she had helped me learn the basics of web design, html, and all of that. This was almost eighteen years ago, now that I think about it.

In her day, J had been pretty wild. She was the kind of girl who would sleep with the UPS delivery man as he delivered a parcel to her home if she thought he was cute. I must say I really respect a woman who is honest about her sexuality, whatever form it takes.

I mention that just to indicate that J knew a little bit about men in all their varied splendor, the good, the bad, the skilled, the inept, and so on. By the time I met her, she had met her mate and they are together happily to this day.

She answered the phone and asked how I was.

I said, “Terrible! I was driving this girl to and from the meeting every week and I really liked her and tonight she told me she was getting a ride “home from some asshole in a baseball hat.”

And she said,”Oh yeah. Without fail.”

And then we talked about other stuff for a while. And I guess I felt a little better.

Several years later, T had become a hairstylist and she was cutting my hair. She was married to someone, but not D—–.

I told her the story of my phonecall that night of my heartbreak at her unwitting behest. And when I got to the part where J said “Trust me Knox, if he’s wearing a baseball hat, premature ejaculation every time,” T had a shocked expression on her face.

She said,”He had that problem!”

So girls … now you know.

On a related topic, a rich Danville friend of mine, a married woman was trying to set a friend up with another mutual friend. She asked me what I thought. I said,”He’s cheap.”

And she said,”Forget it. Cheap guys are always lousy in bed.”

And I said,”Well, just remember, I’ve been a spendthrift all my life!”