I was in the pawnshop today, making sure one of my guitars could play the blues, with authority, sometime in the near future. 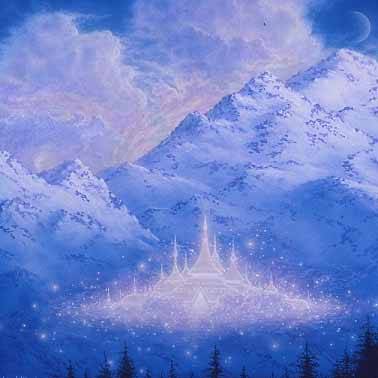 A woman, somewhat older than me, was buying some drums for a couple of men. She was slender, well-kept, smelled of money. She was quite gregarious and had a lovely smile.

She asked me if she could give me a card. She had prayed for an image and the Virgin Mary sent her a picture and then Buddha told her to hand out one million cards with these teachings:

I accepted the card with a smile and said,”Well, you are one card closer.” She smiled back.
Now, I have known this woman before, rich girl turned new age seeker with borderline personality disorder. She keeps pets, man-pets, buys them drums and vegan dinners. Woe unto them who displease her or fail to praise her vibrational wisdom.
And with that, I am off to join my Twin Flame.

“The entire country of Shambhala is in the Jinn State; here is where the principal monasteries of the White Lodge exist.” – Samael Aun Weor, The Major Mysteries

“The secret country of Shamballa is in the Orient, in Tibet.  The Master Jesus has a temple there. Other Masters live with him who have also resurrected and who have kept their bodies over the many ages of time.” – Samael Aun Weor, The Aquarian Message