The Coming of the Great Darkness, Pt. 1

—The Police, “Born in the Fifties” 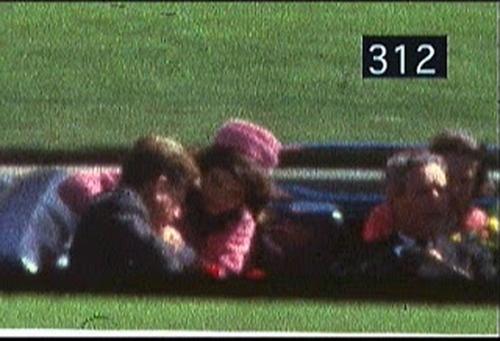 Jackie Kennedy cradles her husband after bullets shot by snipers on the grassy knoll blew half his head off. This act of war against the United States, of high treason, changed the course of American history. The assassination, and the failure of our country’s leaders to bring the killers to justice was, and remains, the central fact, the darkness at the core of our American Republic.

I was in eighth grade when John Kennedy was killed. I remember standing in the cafeteria with the whole student body as a teacher told us that John Kennedy was dead in Dallas. I will never forget that day, the shock, the sadness: who among us of my generation will? We loved John Kennedy and the great promise of America, for all Americans, not just the few, that he embodied. If you were not there, you cannot really know how exciting it was—the killers killed so much more than a man that day.

Of course, they had to kill again, not just RFK, who would have, as president, brought his brother’s killers to justice, and Martin Luther King, who inspired millions with his grand vision for racial harmony and economic justice in this country, but many others involved with the original assassination, as well as scores of witnesses, over the next fifteen years.

Our parents, who still trusted the institutions that shaped our nation—government and the media, mostly— told us that Lee Harvey Oswald did it. And then somehow, a distraught patriot managed to sneak into the Dallas Police department and kill Oswald. Many years later we would learn that Jack Ruby was a well-connected mobster with strong ties to Sam Giancana’s organization in Chicago. Ruby died of cancer in jail. Even as a kid, I knew the whole story smelled.

Approximately fifty days after the killing of our beloved President, “I Want To Hold Your Hand” by the Beatles made number one on the US charts. So the pain was masked, but never forgotten.

By 1968, our nation was in full ferment. We were fully engaged in Vietnam; young men were dying for no reason. Our friends who had engineered the killing of JFK were, among other things, shipping massive amounts of heroin from the Golden Triangle to the ghettos of America.  Massive protests against the war and for civil rights—this was before political correctness split the left into a hundred pieces—rocked the nation’s campuses. Bobby Kennedy advanced steadily on the presidency. Martin Luther King’s rhetoric and influence had reached a new level of power and influence.

The very next day, Martin Luther King was assassinated in Memphis, Tennessee. For a plausible reconstruction of the plot to kill him, I recommend James Ellroy’s,”The Cold Six Thousand.” (More on that book later.)

Later, at Dr. King’s memorial service, Richard Nixon, the always Mob-friendly Darth Vader of twentieth century American politics, leaned over to whisper hello to Jacqueline Kennedy, black-draped in the pew ahead, and received an icy stare in return.

And the powers that be were getting nervous as the sixties came to a close.

While Richard Nixon was planning his political comeback, everyone knew Bobby Kennedy would be a shoo-in for the presidency. RFK was, of course, assassinated on June 5 of 1968. I recommend Ellroy’s book for a plausible reconstruction of how that plot developed. (As an aside, I came across an interesting article the other day about the RFK killing: Did the CIA kill Bobby Kennedy?)

Nixon was elected President. Four years of nightmares followed, although he was forced to do a few things, like create the  Environmental Protection Agency, which Bush has now nearly dismantled.

While running for re-election in 1972, Nixon apparently got very nervous about information that the Democrats might have about a loan Howard Hughes had made to Nixon’s brother Donald. A crew was dispatched to burgle the Democratic Headquarters in the Watergate Hotel. This led to the the near-impeachment and subsequent resignation of Richard Nixon as President of the United States.

Interestingly, many of the names in the Watergate investigation were also to be found in any history of the failed Bay of Pigs invasion, thought by many to be the Mob’s attempt to reclaim Cuba from Castro, with JFK’s refusal to supply air support for the invasion to be the final straw, thus sealing his fate.

“When you get in these people when you…get these people in, say: “Look, the problem is that this will open the whole, the whole Bay of Pigs thing, and the President just feels that” ah, without going into
the details… don’t, don’t lie to them to the extent to say there is no involvement, but just say this is sort of a comedy of errors, bizarre, without getting into it, ‘the President believes that it is going to open the whole Bay of Pigs thing up again'”

“The Bay of Pigs Thing” according to Haldeman in his memoir, The Ends Of Power, was Nixon’s code phrase for the conspiracy surrounding John Kennedy’s murder. In the same conversation Nixon mentions “Project Gemstone” — intended as “a vast intelligence-gathering and dirty-tricks campaign” against the Democrats and (one would have to say) against the electoral process itself. Given the Republican theft of the 2000 and 2004 presidential elections, and the voter suppression and other dirty tactics of 2006, I sense a pattern.

All of this has been documented by much more serious researchers of recent American history than myself.

My obsession, if you will, has always been more about the spiritual betrayal of our American democracy.

I was called, by my newspaper reporter friends back in the day, paranoid when I would try to point out the non-coincidences surrounding Watergate, Nixon, the Bay of Pigs, the JFK killing, as we sat drinking at the M&M at 5th & Howard in San Francisco. Years later, the same reporters would say, “You were right.”

I still am accused of wearing a tin-foil hat at times. In truth, I look at the facts as best I can gather them and sometimes I must make intuitive leaps … over time my guesses have proven to be correct, every time. Not bragging: I get no pleasure out of seeing the things clearly, I can assure you.

I’m no “truther” – I don’t believe 9/11 was an inside job, though the gang of crooks in the White House was so busy planning the plunder of the treasury and the nation’s resources and probably the invasion of Iraq that they ignored the explicit and well-documented warnings provided to them. The simple fact is that they did not need 9/11 to use as a pretext for invading Iraq, suspending the Bill of Rights, or creating the modern security state in which we now live.

It’s funny … I thought this piece would be a few paragraphs. The following is what my original post was to have been, in my conception of it, anyway.

As many of you know, I used to drink. I drank for all kinds of reasons, I guess the main one being it sort of … runs in the family. I drank over Nixon and his evil machinations for years. In 1990, something happened and I was able to leave the drunk world behind. I’ve had many adventures since then and I’ve been able to think a lot more about the what they did that day and what they’ve been able to do since. The killers did a great job.

I shouted out
Who killed the Kennedys
When after all
It was you and me
-The Rolling Stones, Sympathy For The Devil

Some years into sobriety, I made the acquaintance of an ex-mobster who had managed to get out of the Life alive, and who later got sober himself. He told some great, funny stories and his transformation from a violent man into man of peace and true generosity was a great testament to the power of God. There are many such stories, of course.

Rod had been sober about thirty years when I met him. For some reason, he took a liking to me.

I ran into him one night about six years ago and he gave me the usual kiss on the neck and said in his gravelly voice,”How ya doin’ kid?”

And I said,”I am wondering if you can settle an argument I’ve been having for ten years with my sponsor.”

I said,”Well, were you still affiliated with organized crime when John Kennedy was killed?”

I said,”Well, among your associates, who did they think killed him?”

And he got sort of a far-away look in his eyes and after a moment, a long moment, and then he focussed back on me, smiled coolly and said,”Are you having a nice night, kid?”

Click here to read part II of The Coming of the Great Darkness.